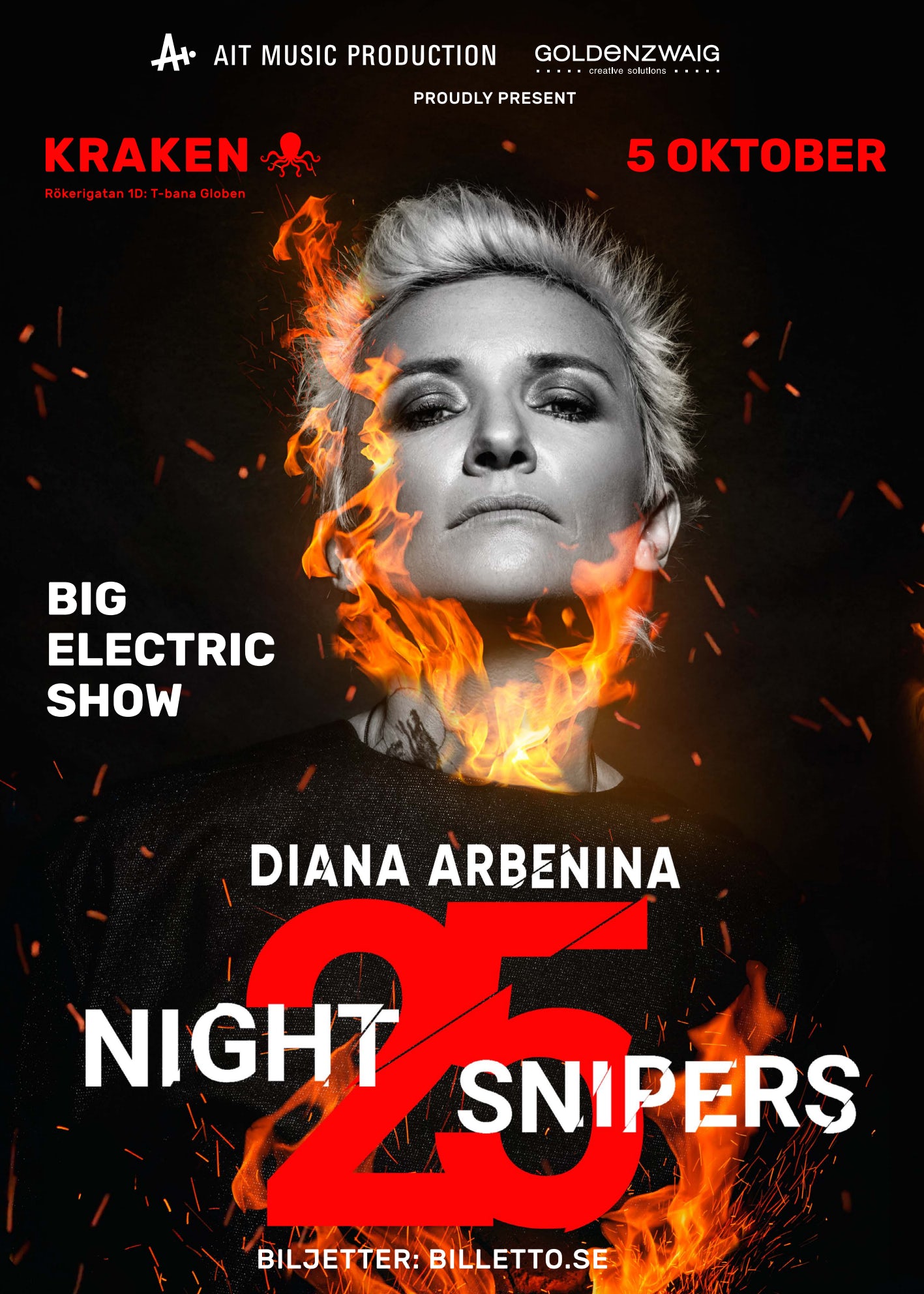 NIGHT SNIPERS (Ночные Снайперы, «Nochnye Snaipery») is a cult rock band from Russia. It was founded in 1993 by DIANA ARBENINA and her kindred spirit musicians. The band has released over 20 records since then – generations of Russian speakers around the world know these songs by heart.

In 2018 Night Snipers celebrate 25th anniversary with an international tour that will finish at Olimpiysky, the biggest concert venue in Russia and all post-Soviet countries (28.000 spectators). And for the first time, Diana Arbenina is bringing her full band to Stockholm to play a big electric show.

Night Snipers’ best known singles are Tridtsatpervaya Vesna ("31st Spring"), Rubezh ("Frontier"), Stolitsa ("Capital"), Asfalt ("Asphalt"), to name only a few. The most of the songs in the band's repertoire is written by Arbenina, but some use the poetry of such authors as Joseph Brodsky, Anna Akhmatova, and Federico Garcia Lorca. She is one of few Russian rock artists who write and perform both in their native language and in English. Besides songs, Arbenina writes poetry and prose. She was awarded the prestigious “Triumph” Literature Prize.

It is no exaggeration to say that Night Snipers’ emotional and sophisticated art encapsulates the soul of the Russian intelligentsia. For millions of Russian music lovers frontwoman Diana Arbenina remains an unparalleled artist: a strong, charismatic female role model.

Arbenina is also an official Russian ambassador for the world-renowned Gibson guitar brand and World Wildlife Fund (WWF). In 2016, she was invited to take part in the national TV show Glavnaya Scena (“The Main Stage”, analogue to “Idol”) as a jury member.

Maybe, even more importantly, Diana Arbenina has been one of the frontfigures of the anti-war stance in Russia. “I don’t want them to be able to tear us apart and embroil our peoples,” she famously said.

The hits of NIGHT SNIPERS, fierce anti-songs and trenchant prose – come and witness all that the one and only big electric show in Sweden!

Not to be missed: October 5th at Kraken