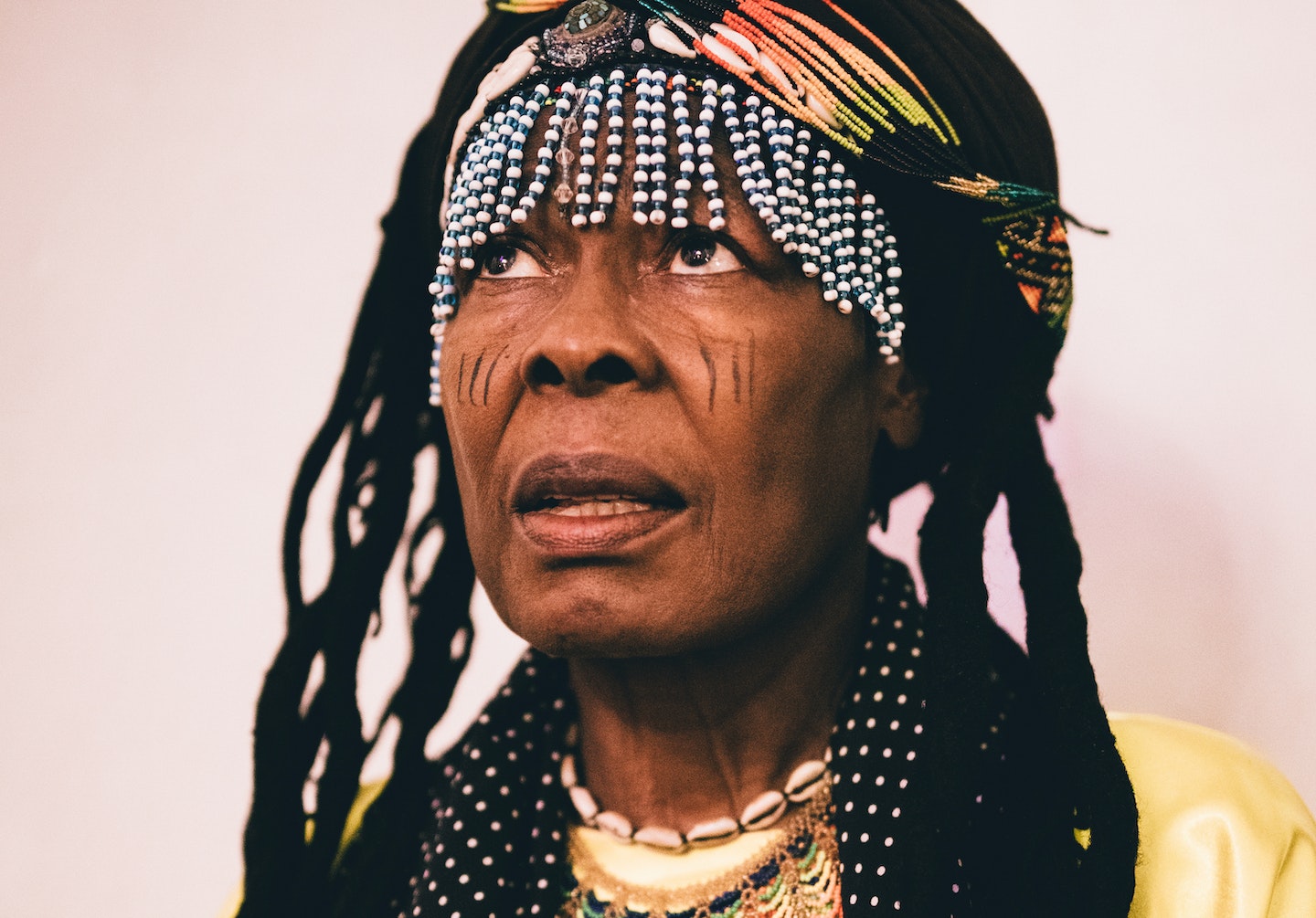 Despite the lockdown and all that jazz, 2020 has been a busy year for the 74-year-old Stella Chiweshe. She played a solid amount of these ”socially distanced” pop-up open-air shows, streamed concerts over the interwebs, prepared the reissue of her first internationally released album „Ambuya!“ (originally from 1987) and worked on a crowdfunding campaign securing money for her new centre of traditional Shona arts in the Zimbabwean countryside: https://www.facebook.com/groups/904987510239707

Still a breathtakingly powerful and highly spiritual performer, Chiweshe reclaimed the throne of the ”Queen of Mbira” after the release of a collection of early singles named ”Kasahwa” on Glitterbeat late in 2018. Her traditional ”Mbira” music (the word is both categorizing the instrument and the style) is a medium to establish contact with the spirits of the deceased ancestors and thus also able to bring about community among the listeners.

In May 2021, Stella Chiweshe travelled to the studio of legendary Krautrockers Faust in South Germany next month to lay down a set of brand-new music under the supervision of the band’s keyboardist Hans-Joachim Irmler. Now, she is available to play more of her deeply moving concerts again.

Her Majesty – The Queen of Mbira music from Zimbabwe – like Stella Rambisai Chiweshe is affectionately called, is the first female artist who gained in prestige and has been honoured with recognition in a music tradition that’s been dominated by men: in Mbira music – known as the backbone of Zimbabwean music. The mbira consists of 22 to 28 metal keys mounted on a hardwood soundboard and is usually placed inside a gourd resonator (deze). The keys are played with the two thumbs plucking down and the right forefinger plucking up.

She is one of the few musicians in Zimbabwe and Southern Africa, who since more than 40 years is working in the role of traditional Mbira musician. She is a well respected and important woman in the music business too, where bands perform at festivals, in theatres, churches, schools, community halls as well as in families homes for their ancestors. She set an example for the rest of the women musicians in Zimbabwe. She is a professional artist, in the entertainment industry and the international music circuit. In Zimbabwe, she released more than 20 singles of Mbira music of which her first single Kasahwa went gold in 1975.

After Independence, she was invited to become a member of the original National Dance Company of Zimbabwe, where she soon took the part of a leading Mbira Solo player, dancer, and actress. Her Solo work has established herself as one of the most original artists in the contemporary African scene using mbira music to show the depth and power of her traditional spiritual music at home and abroad.

Chiweshe’s experience has been stimulating her to introduce Mbira music to the occidental context without losing the relation to her Zimbabwean tradition. Since then she has won several awards in her country. In 2003 the University of Zimbabwe honoured her with the Master’s Degree in Arts.
Stella Chiweshe started to perform solo in ceremonies around Zimbabwe in the early 1970es.

Johansson started out his musical journey some distant years ago in the Swedish city of Varberg, then as a guitar player and composer in various rock- and jazz-groups. After having had a minor revelation when experiencing a George Harrison-composition on a Beatles-album; an overwhelmed Jerry realised that the point of no return had finally arrived.

He immediately began studying the classical Indian raga and the world of the sitar on an advanced level, with a most serious approach.
This newly found universe of his does not only need highly concentrated and daily practise, but also requires an ascetical way of living and a humble approach to the world at large.

Sitar master Roop Verma appears, himself a former student of master Ravi Shankar; and he takes Jerry under his wings, so to speak, and Jerry becomes his pupil.
Jerry practises various Indian modal scales and ways of thinking and plays and plays, and in time reaches the innermost soul and spirit of the classical Indian raga.
The open mind of Jerry assimilates impressions and ideas, and the sitar player Jerry Johansson moves on from there to here; from a student to finally becoming a sitar master performer himself.

Jerry Johansson works in his very own tradition, in where ancient Indian traditions of the classical raga music assimilates together with the Swedish heritage of folk music; but also incorporates the knowledge and understanding of contemporary classical music. Musical textures extends, re-shapes and changes places; in Jerry Johansson´s exquisite ways of thinking and blending our ancient musical heritage from both East and West, a totally new and unique music emerges. A music in where traces remembrances from then and now, Scandinavia and Asia assimilates together to a totally natural music that is all Jerry Johansson´s.

Jerry moves freely as an adventurous musical earth-traveller in the best of senses; combining Indian ways of looking at the world with bare Swedish feet in the glowing grass of the sparkling world known as the ever-present NOW!